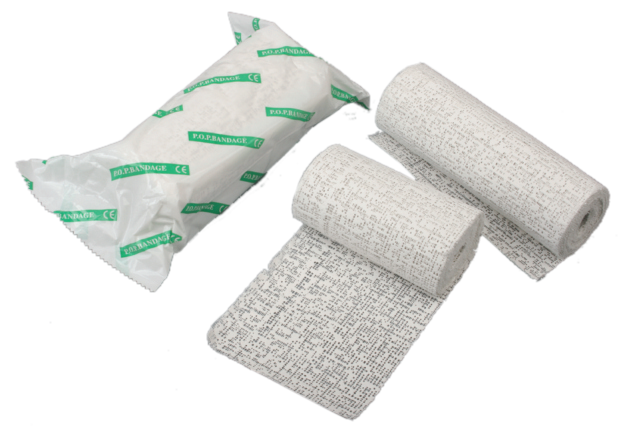 Plaster of Pairs Bandages, Various materials have been used since ancient times to help immobilize fractures. In this review, we discuss the history and developments of these materials as well as plaster of Paris. There has been a recent trend away from non-operative management of fractures, and skills in the use of plaster of Paris are declining. For the successful treatment of patients, it is important to appreciate how plaster works, how it should be used, and what can go wrong. In this review, we also discuss principles of applications and complications of plaster of Paris.

Immobilization of injured limbs has been performed for thousands of years. Before contemporary casting materials became widely used, people used a variety of materials to form rigid casts. Over the centuries immobilization has evolved from using simple wooden splints and rags to plaster of Paris, fiber, and soft casts.

The earliest examples of the active management of fractures in humans were discovered at Naga-ed-Der in 1903 during the Hearst Egyptian Expedition of the University of California led by Dr. GA Reisner. In a paper published in the British Medical Journal in 1908, Mr. G. Elliot-Smith describes two sets of splints that were found during excavations of tombs from the fifth dynasty (2494-2345 BC). One of the earliest descriptions of casting material was by Hippocrates in 350 BC. He wrote about wrapping injured limbs in bandages soaked in wax and resin. According to the earliest known surgical text The Edwin Smith Papyrus (copied circa 1600 BC), the Egyptians were using self-setting bandages, probably derived from those used by the embalmers. Later descriptions of casting came from the Arab physician Rhazes Athuriscus. El Zahrawi (960-1013 AD), a surgeon born near Córdoba in Spain, described the use of both clay gum mixtures and flour and egg white as casting materials. Starch-based casts appear to have been the standard treatment with only minor changes until the beginning of the 19th century with only a few minor changes.

Further advances in the choice of materials were made during the wars. In the 18th century, Henri François Le Dran, who practiced surgery at Hôpital de la Charité in Paris and was a surgeon in Germany Army and consulting surgeon to the camps and armies of King Louis XV, used to soak his bandages with egg white, vinegar, and clay powder or plaster. A modification to the materials used was introduced by the father of modern military surgery, Baron Dominique Jean Larrey, a French surgeon in Napoleon’s army. He was a surgeon in chief from 1797 till the Battle of Waterloo in 1815. Larry's modification was adopted from Don Eugenio de la Penna who bandaged the fracture with linen that had first been moistened with Camphor spirit, egg whites, and lead-acetate. Unfortunately, these were not used on a large scale due to costs. Baron Louis Joseph G Seutin (1793-1862) was a belgian professor and surgeon in chief at the Universite Libre de Bruxelles. As a chief doctor of the Belgian Army, he fought in at Waterloo. He became famous for inventing starch bandages known as “La Bandage Immobile” or “L’Appareil Amidonnee” that consisted of strips of linen or bandages and carton splints, soaked in starch and wrapped around the limb.

Seutin’s method was popular in England by Joseph Samson Gamgee, the Birmingham surgeon who amongst other things invented Gamgee tissue. In the first half of the 19th century, it was not popular to reduce fractures until the swelling of the soft tissue decreased. Following Seutin’s rules, Gamgee insisted on immediate reduction and application of the starched apparatus and registered spectacular success.

ORIGINS OF PLASTER OF PARIS

Plaster of Paris is produced by removing the impurities from the mined gypsum and then heating it under controlled conditions to reduce the amount of water of crystallization. Plaster of Paris was well known as a building material for many centuries before it was introduced as casting material. Egyptians, as well as Romans, used it for plastering walls however not more is known on plaster use after the end of Roman occupation. In modern-day England, it was widely excavated in Roman coffins discovered in York, and on the walls in the military barracks of the Second Augustan Legion excavated at Caerleon in Monmouthshire. In medieval times gypsum was used only for alabaster statuary. There are various accounts describing the origin of the name plaster of Paris. One account mentions King Henry III who visited Paris in 1254 and was so impressed by fine white walls that he introduced similar plastering in England where it became known as plaster of Paris.

The first use of plaster of Paris as a cast for injured limbs took place through a technique known as plâtre coulé that became popular in Europe at the beginning of the century. This technique involved pouring plaster of Paris around injured limbs encased in a wooden construct. Due to the weight of the construct, the patient was largely confined to bed during the period of fracture healing. This disadvantage was highlighted by Seutin, but this remained a relatively popular technique in Europe with some surgeons using it for lower limbs only and some using it for both upper and lower. Starched and illuminated bandages were also used as a casting method.

In 1839, Lafargue of St. Emilion used fresh warm starch paste mixed with plaster of Paris powder applied to layers of linen strips. That dressing had the advantage of hardening much quicker, reducing the setting time down to six hours. The Dutch military surgeon Anthonius Mathijsen while working at the military hospital in Haarlem discovered that bandages soaked in water and plaster of Paris were becoming hard within minutes providing sufficient casting for injured limbs. He published his monograph in 1852 in a medical magazine called Repertorium. His plaster bandage was based on the principles of Seutin, who 10 years earlier introduced starched bandages known as bandage amidonnee In his paper entitled “New Method for Application of Plaster-of-Paris Bandage”, Mathijsen highlighted many disadvantages of Seutin’s dressings including lack of self-adjustment to the changing conditions of the limb, long duration of days needed for the casing to become sufficiently solid, carton splints shrinking and becoming shorter when they dried off adversely affecting fractures, and in cases of suppuration or with small children urinating, dressing becoming soft and loosen. Mathijsen’s bandages consisted of strips of coarse cotton cloth with finely powdered plaster rubbed in. This method of preparation was used until 1950.

Nikolay Ivanovich Pirogov, ahead of the department of surgery at the St Petersburg Medico-Surgical Academy and a Russian army surgeon during the Crimean War, conceived his idea to use plaster splints around 1852 while observing the work of a sculptor who used strips of linen soaked in liquid plaster to make models. Pirogov used coarse cloth, either in large pieces or in strips that were immersed in a liquid mixture of plaster of Paris immediately before applying them to limbs protected by stockings and cotton pads. Based on his Crimean experience, Pirogov believed that all patients with fractures due to missile wounds should not be evacuated from the forward dressing stations until the limb had been immobilized in a proper dressing of plaster of Paris. After the war, he refined his method by cutting coarse sailcloth to a defined pattern shaped to fit a part of the body and soaking it in plaster before application